The Bowtie Funnel: Scientific Model of the Customer Journey 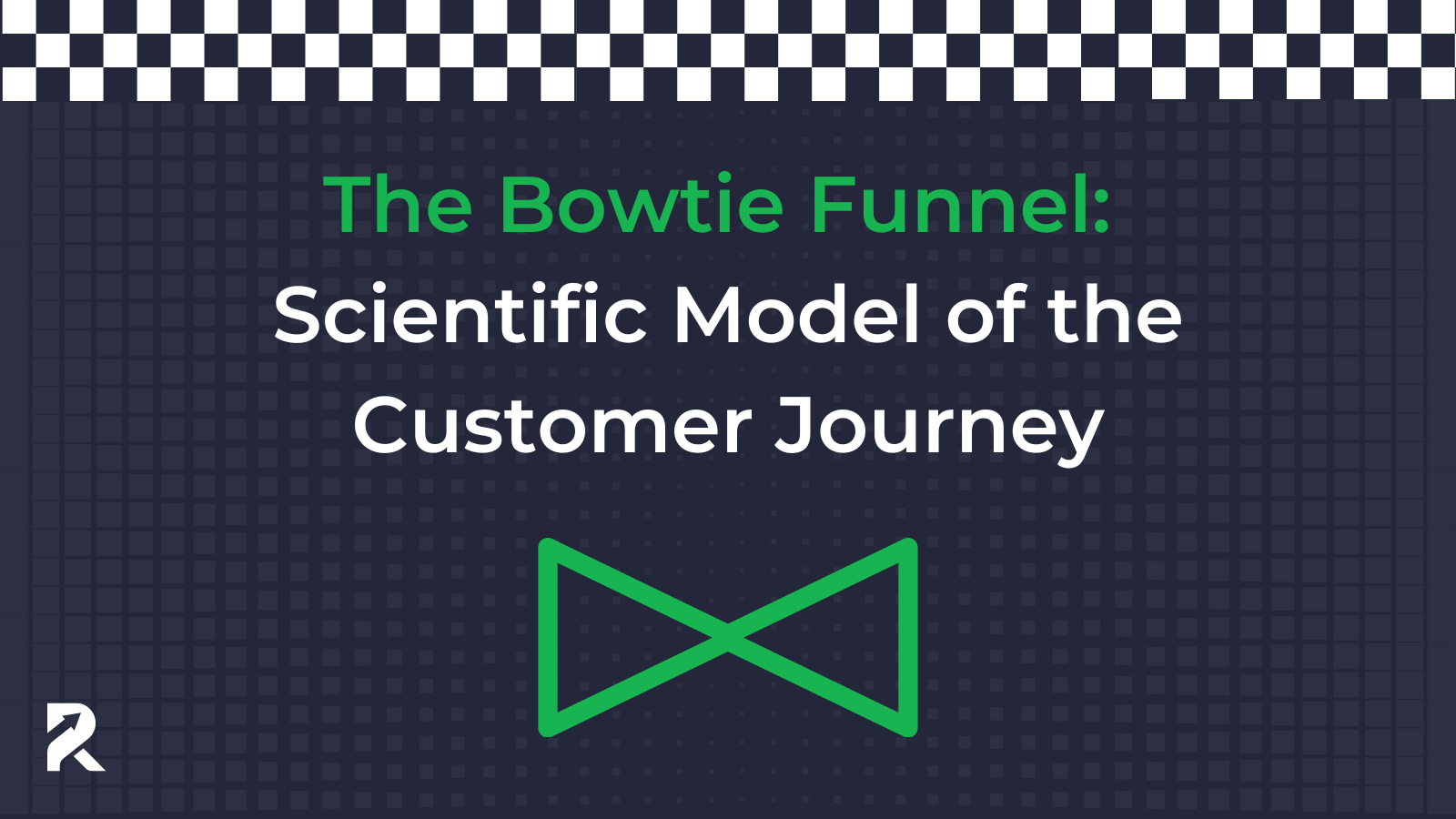 Funnels, Flywheels and More, Oh My!

Remember those times in school when you’d pay literally zero attention to what was going on for 47 minutes straight, and then out of nowhere the teacher would say, “If you hear nothing else today, make sure you hear this.  This is the really important part.”?

If you have been trying to grasp the importance and function of RevOps, but have been kind of nodding off anytime it was explained…

Make sure you hear this, this is the really important part!  Why?  Because if you're not doing the following, then you’re not doing RevOps.

Where Traditional Marketing Funnels and Flywheels Come Up Short

Understanding the customer journey through a visual representation is a great idea, but the problem is that many of these visuals come up short in some way.

The traditional sales funnel that everyone loves to hate narrows down the potential customer pool from Prospects to Leads to MQLs and finally SQLs.  Then the funnel stops. 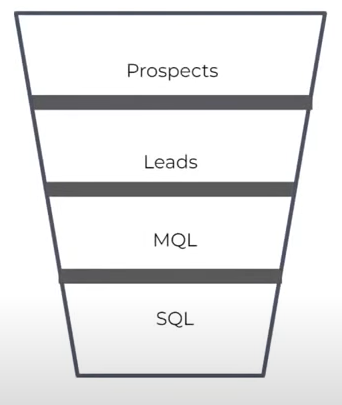 Instead of a funnel, HubSpot utilizes a flywheel to display the stages of Strangers, Prospects, Customers, and Promoters, in that order.  The flywheel illustrates that along the way these (potential) customers are attracted, engaged, and ultimately delighted, thus spurring growth. 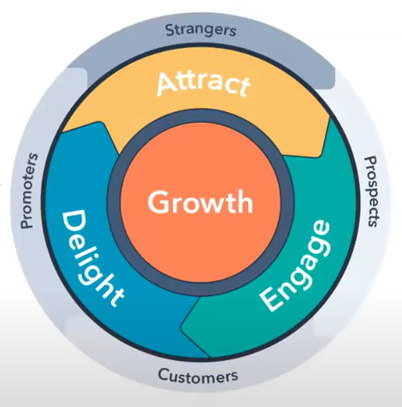 Some have attempted to update the funnel into a vertical bowtie shape, where the top remains the same as the original funnel, but the bottom, at the point where it begins to widen again, now includes Retention and then Upsell/Crossell/Expand. 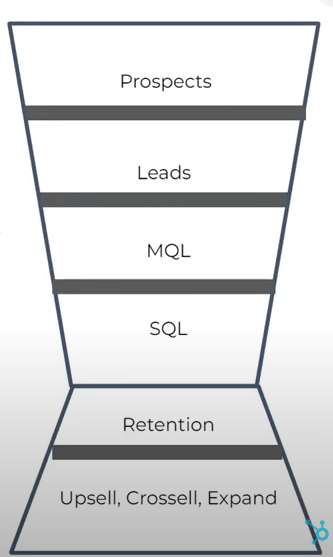 The problem with both funnels, and even the flywheel, is that they are methodologies.  Turning these funnels into a data model in a CRM is much more of a science than an art.

Why is that?  Because you need to begin thinking about the metrics in a way that are helpful, that will drive business, that enable you to see if your GTM motion is working, and that allow for adjustments.  The solution for mapping the customer journey is a scientific model in the shape of a horizontal bowtie funnel. 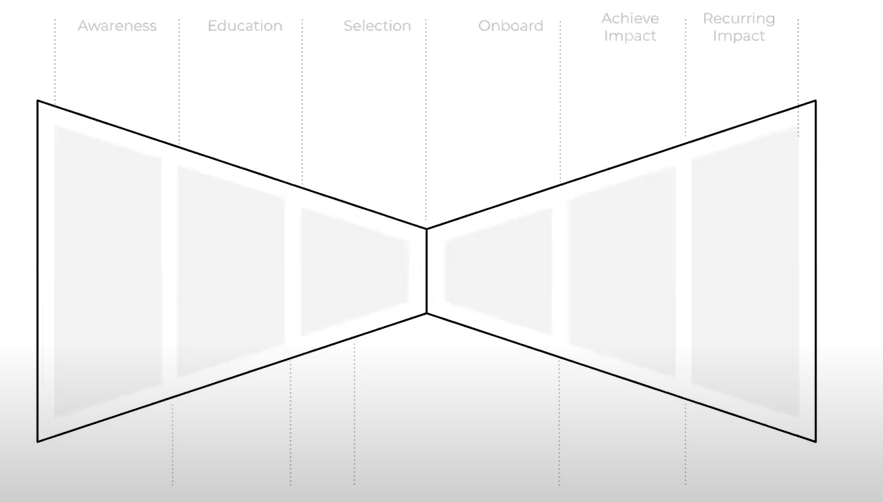 From left to right, the horizontal full bowtie funnel begins with Awareness, transitions to Education, and ends with Selection before the Marketing and Sales side of the funnel narrows.

As the funnel begins to widen again (to the CS side), there is Onboarding, then Achieving Impact (end result has been achieved), and finally Recurring Impact, where retention/renewals, upsells, or cross sales occur.  When Recurring Impact is achieved, it signifies customer satisfaction.  Meaning, they want more of you and your product/service.

The Journey is Not a Linear One 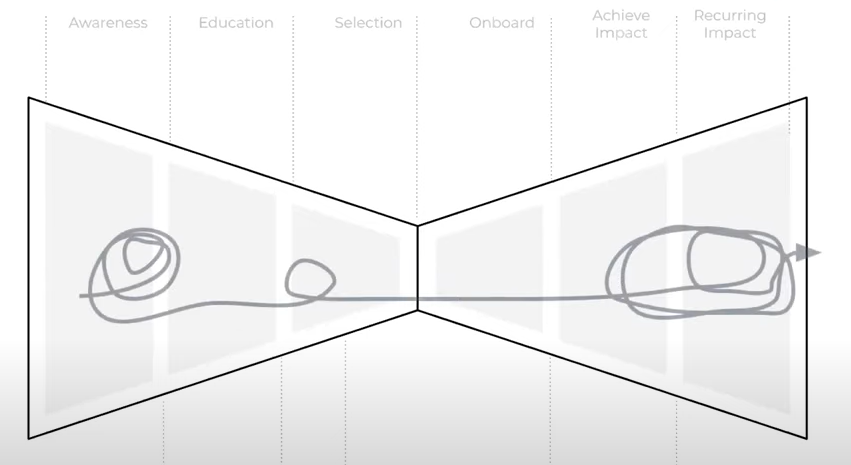 Because models usually only identify or name each stage a single time, it can be tempting to think of the journey through this funnel as a linear one, with one stage seamlessly transitioning to the next time after time.

Nope, not even once.

The reality is that a potential customer will often endlessly toggle back and forth between Awareness, Education, and Selection before (maybe) moving through the narrow portion of the funnel.

The story on the right side of the funnel is no different.  Counterintuitively, there may actually be more non-linear movement once you’ve closed a deal than before.  The journey to Recurring Impact is not without setbacks, but if you can get there it is well worth the effort.

The Right Side of the Funnel = Important 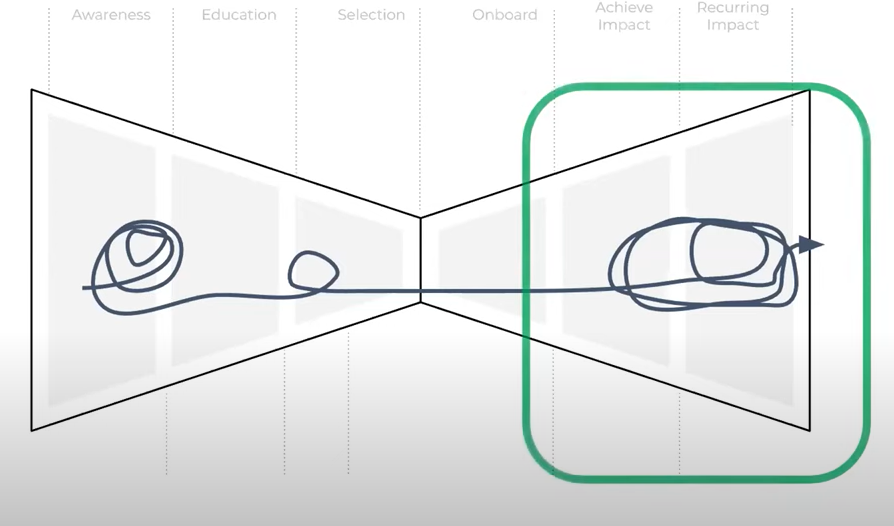 While all stages of this model are vitally important, the movement of the last thirty years away from the ownership model towards the subscription and consumption models has made the last two stages, Achieve Impact and Recurring Impact, the areas in need of the highest amount of focus and attention. 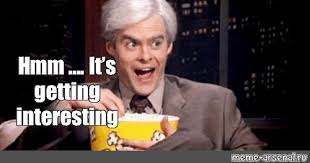 When a scientific approach is properly applied to the horizontal bowtie funnel, a company can begin to create tracking measures and make impacts.  These are essential for success.  Volume metrics, which is the number of leads, deals, or accounts you have at the beginning of each stage, is one such tracking measure.  These volume metrics can then be applied to each of the six stages of the bowtie funnel. 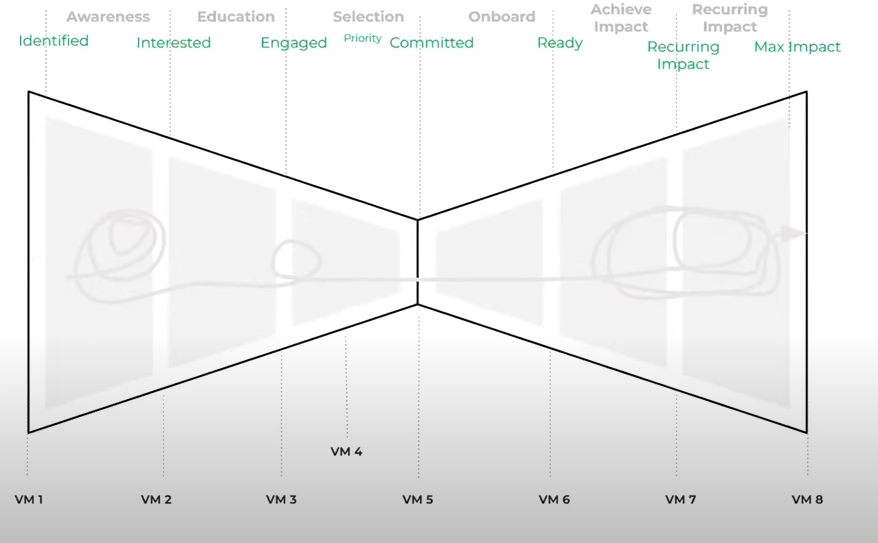 Fundamentally, volume metrics is about counting the number of people that have gone through the process of taking a specific action to move from one stage in the funnel to the next.  For example, the action of becoming engaged is what effectuates the move from the Education stage to the Selection stage.  In total, there are eight volume metrics: 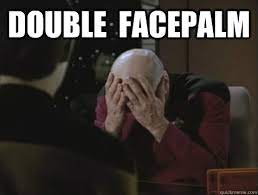 While volume metrics have inherent value, they are also beneficial because their application creates the ability to undertake other tracking measures as well.

While volume metrics provide a state and time, conversion metrics provide an indication of how effectively you are demonstrating the value of your product.  This is done by measuring the rate of leads, opportunities, or accounts moving from one stage to the next.

This demonstrates the value of a common language.  If widely implemented, all RevOps professionals would know the term “CR1” is a reference to the success rate, or ratio, of someone moving from merely visiting a website (Identified) to actually taking an interest in the product or service (Interested). 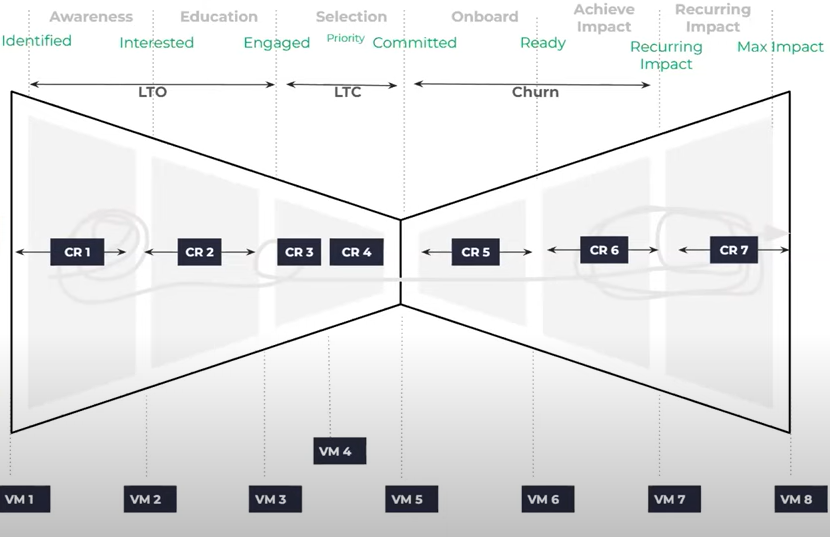 The Most Common Conversion Metrics

The potential benefit of all of this is immense.  When your volume metrics are inside of your CRM and you’re tracking conversion ratios post-customer (commitment), you can then begin looking at churn.  This setup provides the opportunity for a single source of truth (i.e. the person running the forecast models, the RevOps pro!).

Because this person is looking at both the LTO ratio and the churn ratio, there is no need to consult a marketing automation platform and the finance department for this information.  The result?  A more holistic view of the situation.

The last building block in the bowtie funnel is time metrics, which measures how much time passes from one stage to the next, indicating how quickly you are helping customers move through your sales process. 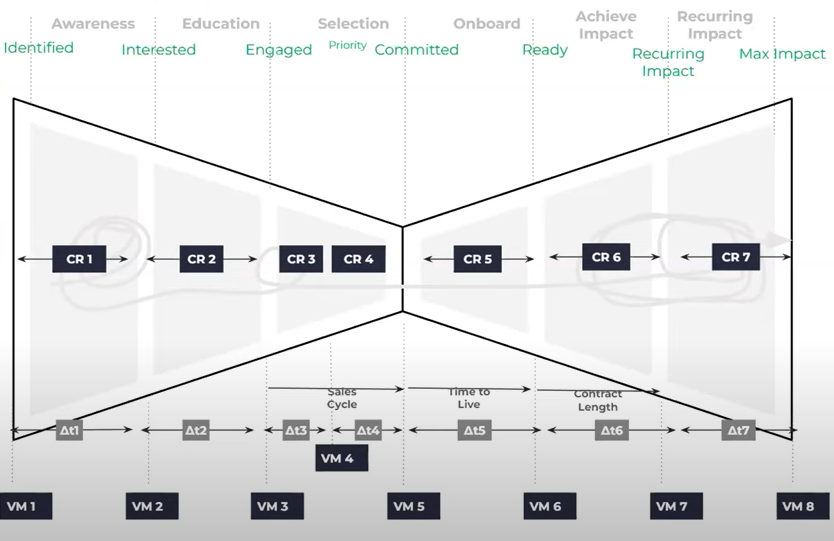 Together, these three metrics (volume, conversion, time) increase the level of maturity of your revenue operations and help dictate the proper allocation of resources.  The primary objective of RevOps professionals is to focus on affecting all three of these because it is how you know if you’re having impact.

Matt Bolian, CRO of RevPartners sums it up like this:  “If you can’t today do this inside your CRM, then start here.  Stop everything, get this done, put this in your CRM because this is what the foundations are for you to be able to know where to focus.” 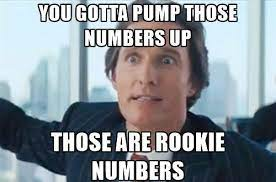 This is revenue operations.  If these aren’t in place, then you’re either not doing RevOps, or you're not doing it well.  Period.

If you just realized you’re not doing RevOps well (or at all), that’s where RevPartners comes in.  What can we do?  Well, for starters we can help make your bowtie funnel look more like a bowtie does five minutes into a wedding ceremony, as opposed to how it might look after a night of partying.  Let us be your RevOps team and get you on the road to revolutionary levels of recurring revenue!